PreviousNext
123456789
Maps were disabled by the visitor on this site.

Swanpool is a small rural community on the Midland Highway between Benalla and Mansfield. It has a store, sports ground, bowling club, a couple of churches, just a few houses and the impressive Swanpool & District Memorial Hall. The hall was built by volunteers over two and a half years and was officially opened by Sir Henry Bolte on 1st November 1957.

Films were shown at Swanpool even before the hall was built and so it was inevitable that a biobox was part of the design for a new hall. This was an important factor in its favour when Kevin Smith was looking for a location to start his own private cinema.

Kevin retired from the SEC in 1989 and, after much work, the curtains opened for Swanpool Cinema in October 1991. Kevin met Shirley Swallow, his wife to be, at a film festival in Rosebud and together they ran the cinema as a private business for 20 years, retiring on New Year’s Eve at the end of 2011.

Since that time the Cinema has been a Community Cinema, completely run with volunteer labour. A team of volunteers run the Candy Bar, the Ticket Box, Projection and all the admin functions. “So, for over 30 years now Swanpool Cinema has been screening the best of art house and quality movies, usually as a double feature on Saturday and Sunday nights. Matinees, bus groups and fund-raisers are also promoted.”

In 2013 the visual and sound systems were upgraded to D Cinema digital and a new motorised screen was installed. A 16 mm projector, the old carbon arc glass slide projector and a 35 mm projector were retained in the biobox, so the old classics can still be run. Air-conditioning now adds to the comfort and espresso coffee is available at the Candy Bar as well as home-made choc tops.

One added benefit of the new digital system is to be able to work with local filmmakers and screen their video content. Many special events are held throughout the year including short film festivals, the Swanpool Environmental Film Festival and Food & Film Nights. 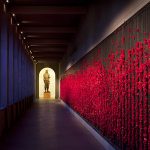