The Upper Murray towns of Corryong, Tintaldra, Towong and Walwa are set in a beautiful High Country landscape where the Murray River wanders through wide valleys of farmland with a backdrop of the stunning Snowy Mountains and Kosciuszko National Park just across the Victorian/NSW border. From Corryong, the largest of these towns with a population of around 1400, to the small, historic villages on the banks of the Murray River, this district offers scenic touring routes, popular events, activities and the annual Man From Snowy River Bush Festival. This area is located in the far north east corner of Victoria and is about a 1.5 hour drive east of Albury/Wodonga.  First settled by Europeans in the 1830’s and home to some notable Australians like John (Jack) Riley, said to be Banjo Paterson’s ‘Man From Snowy River’ and Elyne Mitchell (Towong Hill Station), Order of Australia Medal recipient and author of The Silver Brumby book series. Jack Riley managed the 20,000 acre Tom Groggin Station from 1884 and lived there until his death in 1914. In 1890, Banjo Paterson joined the Mitchells of Towong Hill Station, on a trip into the High Country and stayed overnight in Jack Riley’s Hut where Riley recounted the now famous ride. It is said that Jack Riley was once taking horses to sale at Dalgety for his Brother-in-law when he was picked up by police and unbeknown to Jack, the horses were stolen. He wanted to protect his Sister so he took the blame and spent 4 years in jail. It is also said that Banjo Paterson was against criminals and this is apparently why he never announced Jack Riley as being who the poem was about, so this has always led to some mystery surrounding the character’s identity.

Corryong is where you will find the Man From Snowy River Museum which includes historic skiing equipment, Jack Riley’s watch and saddle bags, war history and POW Jim Simpson’s rug, which has a fascinating story behind it. There are also some old buildings on display like the police lock-up and the tiny ANZ Bank, which had a window that Customers were served through. Open 10-4 most days, contact the museum for further details on 02 6076 2600. About 10 kms along the Murray Valley Highway is the small village of Towong, situated beside the Murray River and home to the annual Towong Cup horse race (March Labour Day Weekend) at the Towong Turf Club. Established in 1871 and with the oldest grandstand in Victoria, part of the movie, Pharlap, was filmed at the racetrack with the grandstand as the backdrop. Tintaldra is a small, historic village, the oldest in the Upper Murray district and also on the banks of the Murray River, only about 10 kms from Towong. Halfway between Towong and Tintaldra is Farran’s Lookout which is a picnic area with shelter, informative signage and spectacular views over the Murray River all the way to the Snowy Mountains.

The Tintaldra Store was established in 1864 and offers tea rooms filled with local history and memorabilia. Behind the store is the old wood fired bakery that operated from 1910-45 and is open to the public for viewing. The town has a pub and nearby you will also find a shady rest area beside the bridge over the Murray River. Walwa is about 23 kms along the Murray River Rd from Tintaldra and although only having a population of around 250, it is the 2nd largest of these 4 High Country towns with a range of services, stores and a history back to the 1860’s. The nearby Burrowa-Pine Mountain National Park has a variety of bushwalking tracks, waterfalls, spectacular views and Pine Mountain is a huge rock monolith said to be 1.5 times the size of Uluru/Ayers Rock. Detailed information on the park can be found here

Corryong and Walwa each have a golf course with sand greens and pleasant views of the surrounding valley and hills. The Upper Murray district has various fishing options and enough space to find your own piece of tranquillity all to yourself. Kosciuszko National Park is only about 30kms away from Corryong via The Alpine Way, just passed Khancoban over the Vic/NSW border. This route continues on through some gorgeous bushland and stunning campgrounds on the Western side of the Snowy Mountains and climbs over 1300 metres in altitude on the way up to Thredbo Alpine Resort about 100km away. Alternative campgrounds that also offer picturesque settings can be found at Nariel Creek Recreational Reserve and Indi Bridge Reserve. Nariel Creek is about 10kms south east of Corryong, 3kms down the Benambra – Corryong Rd off the Murray Valley Hwy. This is a very large campground with toilets (including disabled access toilet), ample shady areas and fishing access to Nariel Creek. Cost is $5 per camp per night via honesty box. This campground is the location for the annual Nariel Creek Folk Festival from Dec 27 – Jan 2. Up towards Khancoban at Upper Towong is the beautiful Indi Bridge Reserve on the banks of the Murray River. The turnoff onto the Upper Murray Rd is about halfway between Corryong and Khancoban. The reserve is 9km down the Upper Murray Rd (from the Murray Valley Highway/Alpine Way) and is a free campground with toilet and is suitable for tents and caravans. While not many shady areas, this is a lovely setting with a large row of poplars on the opposite riverbank and easy access for fishing and swimming. 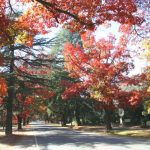 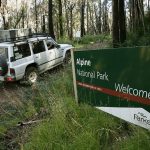